A new official video has appeared on the network, in which the legendary Doc from the fantastic trilogy “Back to the Future” became the mad scientist Rick from the series “Rick and Morty”.

Cartoon Network has published a short promotional video for the series “Rick and Morty” on the adult swim block page on social Twitter, Gamebomb.ru reports. In the teaser, viewers are shown how the portal opens from which the main characters of the cartoon appear. When the camera pans up and shows them in full height, it turns out that Rick this time is played by actor Christopher Lloyd, who is known throughout the world as Dr. Emmett Brown from the movie “Back to the Future.” At the same time, he burps, as the mad scientist usually does. Next to him is actor Jaeden Martell, best known for his leading role in the horror film It. Here he played Morty. 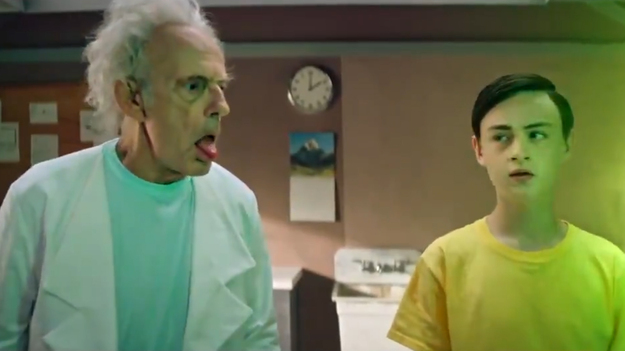 A new video with Doc from “Back to the Future” in the image of Rick from “Rick and Morty” is signed with the number of one of the universes from the animated series, reports Gamebomb.ru. She was named C-132. It is worth noting that she has already been mentioned in the comics. It is worth noting that the series was originally created as a parody of the Back to the Future trilogy. The image of the mad scientist Rick Sanchez was based on one of the main characters in science fiction films about time travel. In the comments, fans were delighted with the release of such a teaser. They noted that the circle is now complete. The original parody ended with Doc actually becoming Rick.

Apparently, the authors of “Rick and Morty” so hint at the plot of the two final episodes of season 5, which will be released on September 5.

After Avengers Endgame, Black Panther’s son was revealed and fans were surprised
Recent Posts
You may also like