In the third major expansion, End of Dragons, ArenaNet is planning to add next-generation legendary weapons to MMORPG Guild Wars 2. This equipment is very difficult to obtain, and its owner will definitely be able to stand out from the crowd. In addition, legendary weapons have nice features. The development team has shared details on what exactly they are preparing in the expansion.

End of Dragons will introduce a set of sixteen new legendary weapons dedicated to the Elder Dragon Aurene. Working on each Legendary is a challenging task of finding something unique to use as part of the design. Chelsea Mills, Senior Set Designer and creator of many of the legendary weapons in Guild Wars 2, explains how the new set was created and reveals some surprises that were not yet known.

What are legendary weapons?

Legendary gear items (including weapons, armor, back items, trinkets, runes, and seals) are some of the most prestigious endgame rewards. This is a long term goal that you should strive for, and it will bring you great rewards. The legendary weapon not only looks unique with special visuals, but it also has several handy features that no other type has:

Make your weapon look like whatever you want for free – Changing the skins of legendary weapons does not require transmutation costs, so you can safely change its appearance at your discretion.

Replace these sigils without destroying them – when applying new sigils to legendary weapons, the old ones are moved to your inventory instead of disappearing.

Choose the characteristics of your weapon at any time – Legendary weapons have a customization option that allows you to choose any of the sets of characteristics in the game.

In Guild Wars 2: Heart of Thorns, you, the commander, become the protector of a mysterious egg from which an adorable dragon named Aurene hatched. She chose you as her protector and became associated with you. It’s been a long journey. You taught her to care for the people of Tyria, and together you defeated the Elder Dragons, a powerful lich and even a god. And you grew up together, and in the case of Aurene, literally. She has now evolved into a beautiful prismatic Elder Dragon, capable of filtering and controlling all the different types of dragon magic she absorbed after each Elder Dragon was defeated.

Since Aurene is a prismatic dragon, capable of refracting the varieties of dragon magic she has absorbed, it seems like this set of legendaries should reflect such a characteristic. Figuring out how to incorporate this into the design was not easy. Is there any way we can modify the weapon according to certain circumstances to show different types of dragon magic? No, it wouldn’t work for several reasons. But what then?

What if the developers had multiple models for each weapon? What if there was a basic set representing Aurene, and then versions for each of the dragons from which she absorbed the magic?

Ultimately, the studio will release not one, not two, but six varieties of new legendary weapons for Guild Wars 2: End of Dragons. It is important to note that only the main Aurene set will be available on launch day, and the rest will appear over time, after the release of the add-on. More details on how to purchase each version will be provided below.

The creation of six different sets meant that ArenaNet had to create ninety-six unique weapon models. Therefore, the entire team put an incredible amount of effort into their development. Here are the preliminary models for the two-handed sword from the other five sets:

Light through a prism – visual effects

Here Nathaniel Hubbell, Senior Visual Effects Artist at Guild Wars 2 took the floor. He has worked on a wide variety of effects, from character skills to boss battles and cinematography.

Unique visuals are an essential part of any legendary weapon, and the Elder Dragon’s legendary items are no exception. Each weapon set includes dozens of individual effects to help bring it to life, and they all need to interact as a whole. For this to work, effects are designed with a number of specific needs in mind. 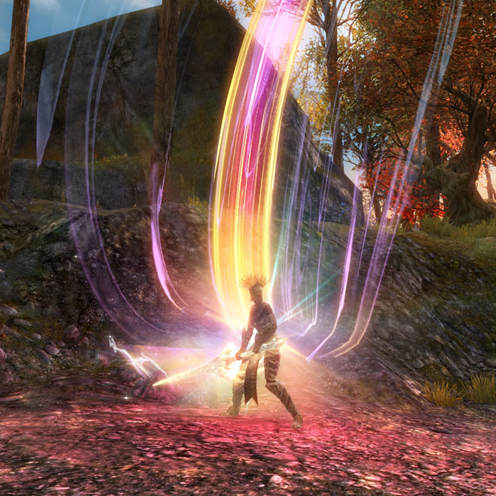 First of all, they need to portray the essence of the Elder Dragon they represent. Each weapon tells a story about the character it is based on, and the effects add their own flavor to the story. Secondly, the equipment and its effects must be in harmony. It is very important that the effects show off the weapon and not hide it. Likewise, it’s important to find the right balance between showiness and sophistication. The effects must be impressive enough to make the weapon look powerful and rare, yet exquisite to be seen during chaotic battle. Finally, the effects should also look good on different backgrounds. Tyria is a vast space with varied terrain, and wherever you roam, your weapons should shine.

One example of how this all fits together is Deathblow, a finisher-style blow effect that affects enemies slain by the Elder Dragon’s legendary weapon. It was created not only to enhance the superiority of this equipment, but also to emphasize the importance of the Elder Dragons in moments of triumph. 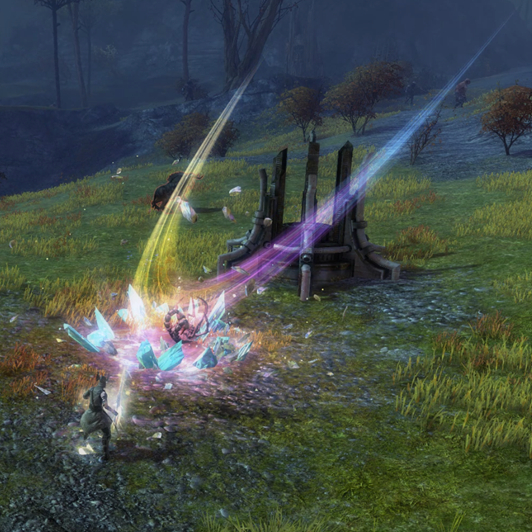 Placing the dragon forward and in the center, Aurene’s killing blow was built around her upward rainbow streak (a motif common to several effects in her set). Here the strip descends from above, leaving a crater of prismatic crystals over the defeated enemy. In this case, it was easy to avoid the visual suppression of the weapon, since the effect does not affect the weapon itself. But for close combat, I had to make a bright flash short.

Achieving the desired level of overall intensity was more difficult – the killing blow had to be large, but not turn every fight into fireworks. To address this issue, the visual effects team coordinated with the design team to control how often and against which types of enemies the effect is displayed. This allowed the lethal strike to be stronger and last longer than a normal strike, but not constantly interfere with it. Finally, to make the effect work in a wide variety of environments, the developers have combined bright, rich elements like the rainbow stripe with solid elements that react to game light, like crystals. This helps to ensure that the effects stand out as well as feel appropriate for the environment wherever they appear.

The studio plans to release several legendary sets at once, but the work is still far from complete. Given the different personalities of dragons, there are many opportunities to explore unique, varied effects.

How to get legendary weapons of the next generation

The story was continued by Steven McNally, lead designer on the Guild Wars 2: End of Dragons awards team. Six versions of sixteen types of weapons were prepared for collectors. Although there are nineteen types in the game, there are no variations for water weapons. Thus, the supplement will feature ninety-six models.

It is the models. Aurene is a prismatic dragon, so her weapon is also prismatic. You will only need to forge each weapon once, and then you will embark on a journey with it to tune it into the magic of other Elder Dragons. So, all those awesome greatswords shown earlier are actually the same two-handed sword, tuned to different magic, and you don’t have to worry about wasting tons of resources to craft and rework it. 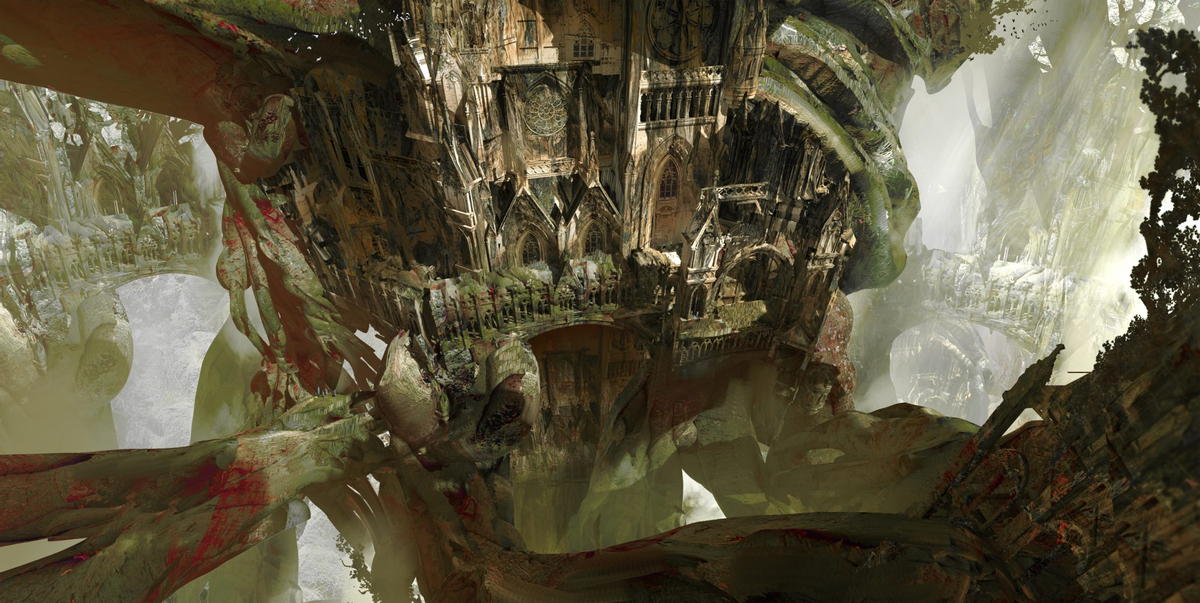 Speaking of resources, how much will they cost you? Well, fair market value would be an option. As with the first generation Legendaries, the precursors and weapons themselves can be listed for sale, so if you want to get them quickly, check out the Trading Post. Well, those who are engaged in the creation of legendary weapons in a more classic way will need to start with the precursor. Completing the story log in Guild Wars 2: End of Dragons will open up an opportunity to learn how to create all of this generation’s precursors. You can make them for yourself or sell them for profit. Everyone will also have the opportunity to earn a precursor by completing the Return of the Living World achievement, so if you want a head start, complete this achievement.

Once you have a precursor, you will need to gift it along with some gifts to Zommoros through the Mystic Forge. Some of these gifts will be familiar to anyone who has tried to create a legendary item before. Others, however, will require new resources that can be found through activities such as fishing. Many of them can be sold at the Trading Post, so if you don’t like fishing, you can buy these resources from players who are constantly fishing and start collecting the rest of the materials.

You only need to create one precursor for each weapon type. No skill is required. Just go through the story, collect materials, create your legendary weapons and that’s it.