The second trailer of the movie “Spider-Man 3: No Way Home” expected by many viewers has leaked into the network ahead of time. Marvel, which revealed Tobey Maguire.

Despite the fact that Marvel and Sony are in no hurry to reveal the secrets of the movie “Spider-Man 3: No Way Home” and are not very active in sharing promotional materials, there are more and more leaks on the upcoming movie comics on the network. This time, the trailer of the film was leaked, in which both Tobey Maguire and Andrew Garfield were revealed, the confirmation of which has long been awaited by fans. Although not shown directly in the trailer, they are given a pretty obvious hint at the very end of the second Spider-Man 3: No Way Home trailer, which was leaked by one of the users. The new leak matches the previous leaks. 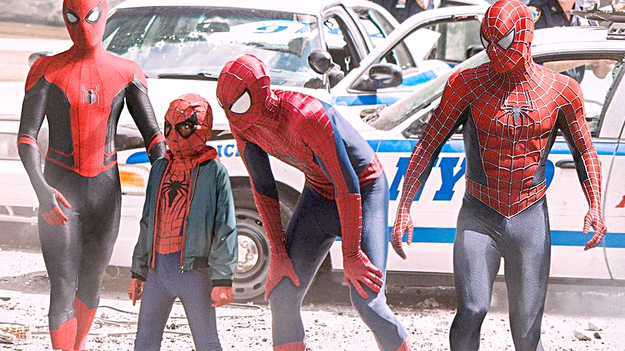 The video itself lasts 3:17 minutes.

The author claims to have seen the finished version of the second trailer, but does not know when it will be released.

Doctor Strange explains the spell much clearer this time. Peter, played by Tom Holland, tells the magician that the disclosure of his identity greatly influenced those around him, and therefore they have no other choice.

Someone throws green paint at Peter.

The trailer shows a shot in which Peter Parker is in some kind of room that looks like a courtroom.

Doctor Strange says they shouldn’t have interfered with the casting of the spell.

Viewers are shown a shot of Peter talking to someone in a cafe, but this person is not shown.

Show the Lizard behind the magic barrier. Peter looks at him, startled. The Lizard has pants, but it still looks just like the Amazing Spider-Man movie.

The Sandman is also present in the trailer as a large sand monster.

The trailer shows a night fight with Electro. Peter in a black and gold suit. Electro is wearing a green and yellow suit.

In the next shot, Willem Dafoe’s Green Goblin explains to Peter that if Doctor Strange sends them back to their worlds, they will die, and therefore Spider-Man must help them. Viewers can only see the villain’s face, plus a purple scarf is visible on it.

Next, several scenes are shown in which Doctor Strange is chasing Spider-Man. Peter himself escapes from the magician with a cube. Strange tells him that he doesn’t know what he is doing.

Next, they show scenes on the bridge with Doctor Octopus. There is no battle, but Spider-Man rescues the people around him before the villain grabs him.

MJ and Ned are at Doctor Strange’s shrine. Ned tells Strange that he always wanted to see a real wizard. Ned then asks if he can wear a cloak, to which Doctor Strange makes an annoyed face.

The trailer ends with someone saying that Peter needs help. Black screen. Then, towards the end of the Spider-Man 3: No Way Home trailer, two shadows are shown walking through Strange’s shrine. Viewers are first shown only shadows, and then the camera switches to Peter Parker Tom Holland, who looks bewildered and dazed.

Finally, at the very end, music begins to play, which is a mixture of soundtracks from the films of Tobey Maguire and Andrew Garfield.

After that, a message appears about the opening of ticket sales.