Skip to content
Home » Marvel’s Guardians of the Galaxy Review: The Avengers have been avenged

After Marvel’s Avengers severely disappointed, it made sense to ask a few questions about the future of the partnership between Marvel Entertainment’s video game division and Square Enix publisher. And that’s because the impression left by this failed experiment is that the Crystal Dynamics studio would have wanted to make a different kind of game, while the publisher wanted a monetizable “live service” for a longer period, and the ostrich -the resulting camel did not please anyone. Fortunately, and somewhat surprisingly, Square Enix seems to have learned its lesson, and the new Marvel’s Guardians of the Galaxy corrects most of the mistakes of the past, becoming one of the most enjoyable gaming experiences of the year. 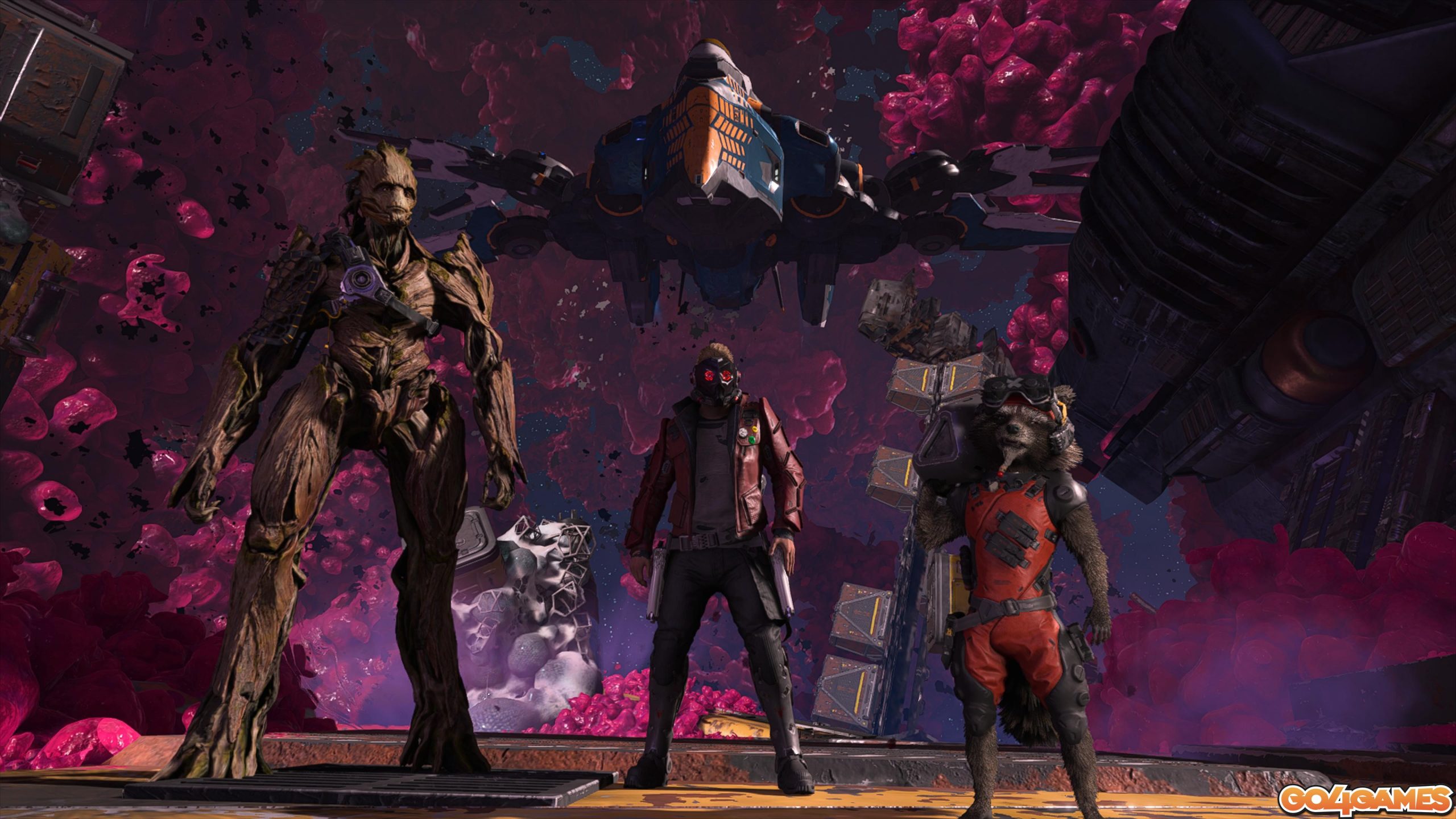 To dispel any doubt, while Avengers is desperately trying to get rid of all the harmful elements of these “live services”, Marvel’s Guardians of the Galaxy is just what fans want from such a game. : a single player adventure with a narrative thread and comic book characters on which it is based. And here the credit goes to Eidos Montreal, the studio responsible for the excellent Deus Ex: Human Revolution and Deus Ex: Mankind Divided, who managed to perfectly capture the essence of these heroes.

For those who don’t know, Marvel Entertainment’s policy regarding games based on these intellectual properties is not to repeat exactly the same formulas as those in the movies of the same name. Thus, the character Peter Parker in Marvel’s Spider-Man is different from the one in the movies with Tom Holland, presenting the vision of Insomniac Games on this hero, and a similar plan was applied in the case of Marvel’s Avengers, with results far below but expectations. Well, Guardians of the Galaxy is moving in the same direction, with Eidos Montreal doing what Crystal Dynamics couldn’t do: presenting a new version of Guardians of the Galaxy, unrelated to the actors in the movies, but it manages to capture attention and win the players’ affection. . 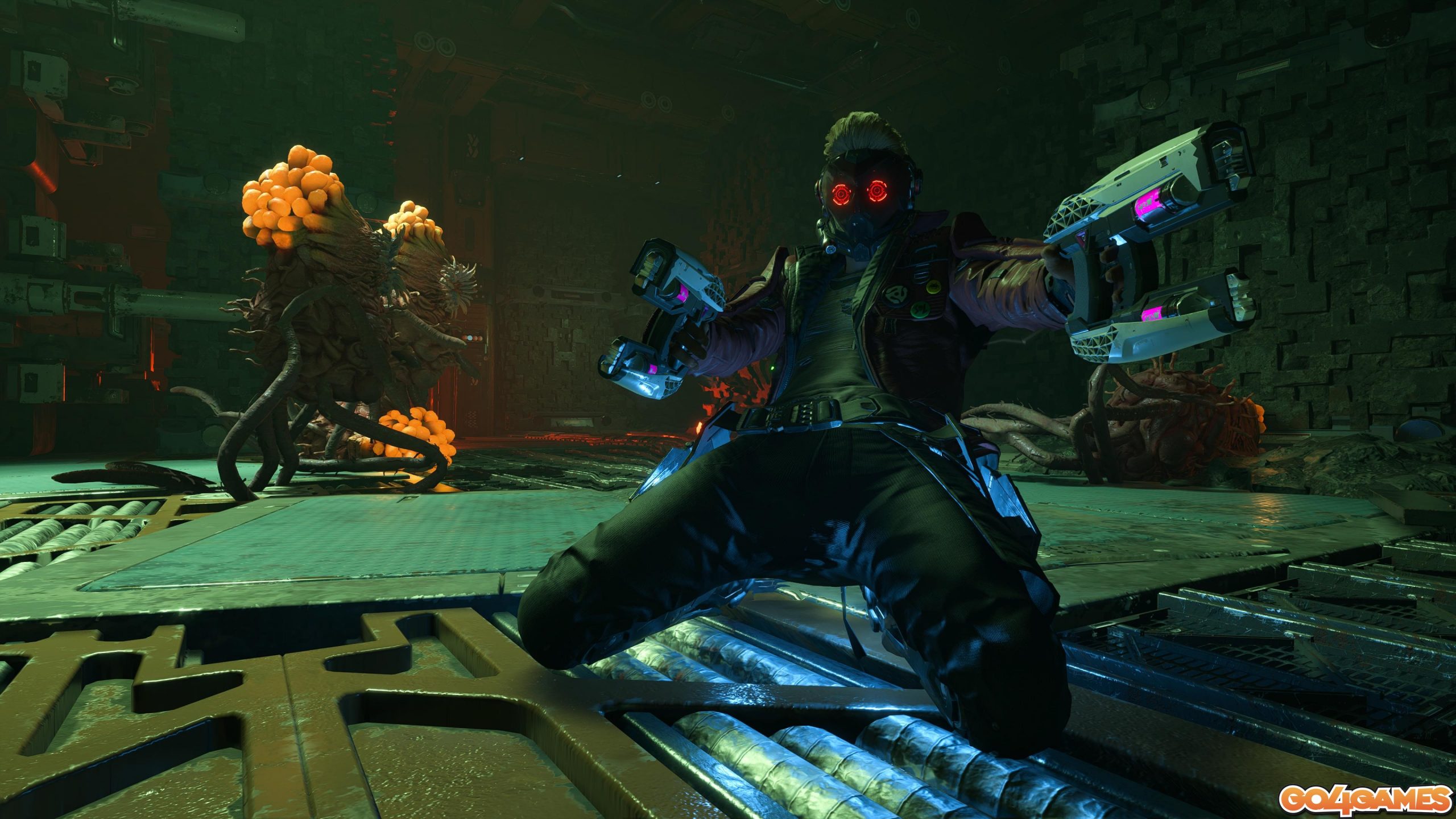 And that’s because, although they look somewhat different, the five guardians – Peter Quill (Star-Lord), Drax, Rocket, Gamora and Groot – are immediately recognizable, and the script, their lines and the way they are interpreted honor the source material. . Thus, after a short accommodation, the new cast convinces you that they are really the legitimate Guardians of the galaxy and not just second-hand children, as in the game based on Avengers.

The screenplay itself is not exactly out of the ordinary, addressing topics familiar to comic book fans and sometimes somewhat foreign to those who, as children, did not have access to Marvel publications. Even so, owning one is still beyond the reach of the average Guardian of the Galaxy. And you will enjoy the excellent dialogues between the characters, which, to my surprise, do not only play a decorative role.

Marvel’s Guardians of the Galaxy confirms its 100% single player product status, the action being often completed by numerous cinematic sequences. And, not infrequently, you can choose the lines with which the central character (Peter Quill) responds to his interlocutors. Although most of these dialogues are only part of the game’s narrative exposition, some options may also affect certain elements of the gameplay itself. For example, well-placed words can make the difference between a stealth-style approach or one where you have to face armies of enemies and gain allies, whose help is not negligible in the later stages of the story.

Overall, if you choose the medium difficulty level, the Marvel’s Guardians of the Galaxy adventure, with all the dialogues between the characters and its cinematic sequences, should span about 15 hours of gameplay. Decent, given that other producers are content with solo campaigns of only 5-6 hours. And if the extra skins for heroes and collectibles catch your eye, you can try to get them all (by exploration, not microtransactions!) By resuming the game in New Game Plus mode. 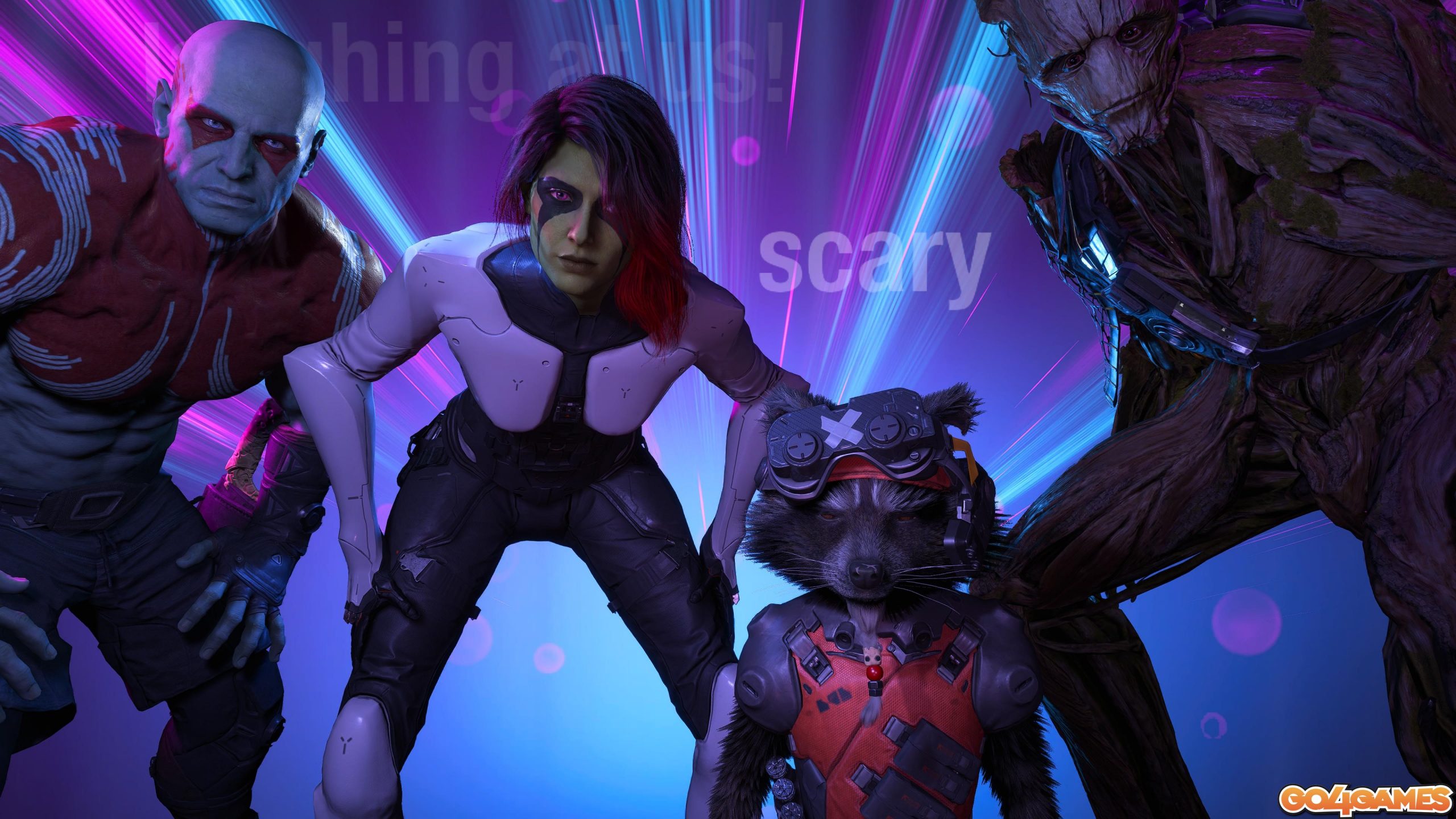 After all, apart from nice characters, funny dialogues and full cinematic sequences, what does Marvel’s Guardians of the Galaxy have to offer in terms of gameplay? A fairly balanced combination of action, exploration, a bit of platforming and solving light puzzles. As I mentioned earlier, the whole game is approached from the perspective of Peter Quill, the player having direct control over this character.

In addition, Star-Lord can give directions to his teammates, both in the middle of battles, where the skills of all the characters are absolutely necessary to come out victorious, and in the quieter moments of exploration. Progress is often dependent on the use of one of the guards’ skills: Rocket can sneak through color and narrow tunnels, Gamora can use his sword and Drax brute force to remove various obstacles, while Groot builds bridges to otherwise inaccessible locations. In all this amalgam, Peter Quill’s pistols, in turn, get certain upgrades during the game, becoming more effective against certain types of enemies, but also absolutely necessary to solve some puzzles. 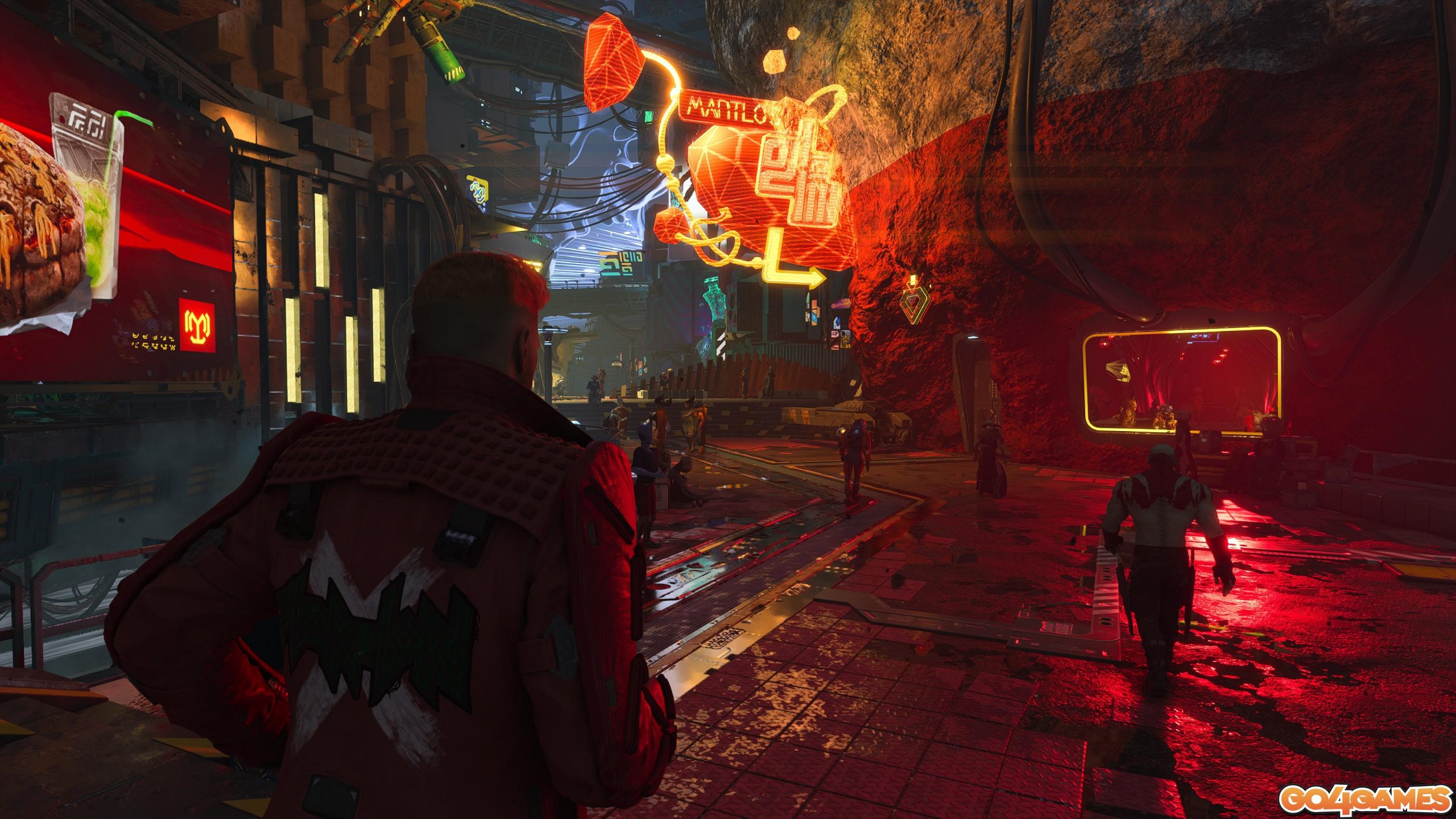 Each confrontation from which the five guards emerge victorious is rewarded with experience points, which, upon reaching some milestones, turn into skill points with which you can unlock new fighting skills for each of the characters. Moreover, in addition to collectibles, textbooks or additional skins, careful exploration is rewarded with the acquisition of resources, which can then be invested in upgrades for Peter Quill’s skills. But don’t worry, during a normal adventure, you will gain enough experience and resources to unlock the entire arsenal of skills and upgrades of all five guardians.

And the fights themselves, though dynamic and spectacular, are not very difficult; this is probably a compromise chosen to keep alive the interest of less skilled players, but also to mask some collisions and animations that are not necessarily finished. In addition to all this, there are also several dogfighting sequences in space in the game, in which you gain direct control over the Milan shuttle, the main means of interplanetary transport of guards. 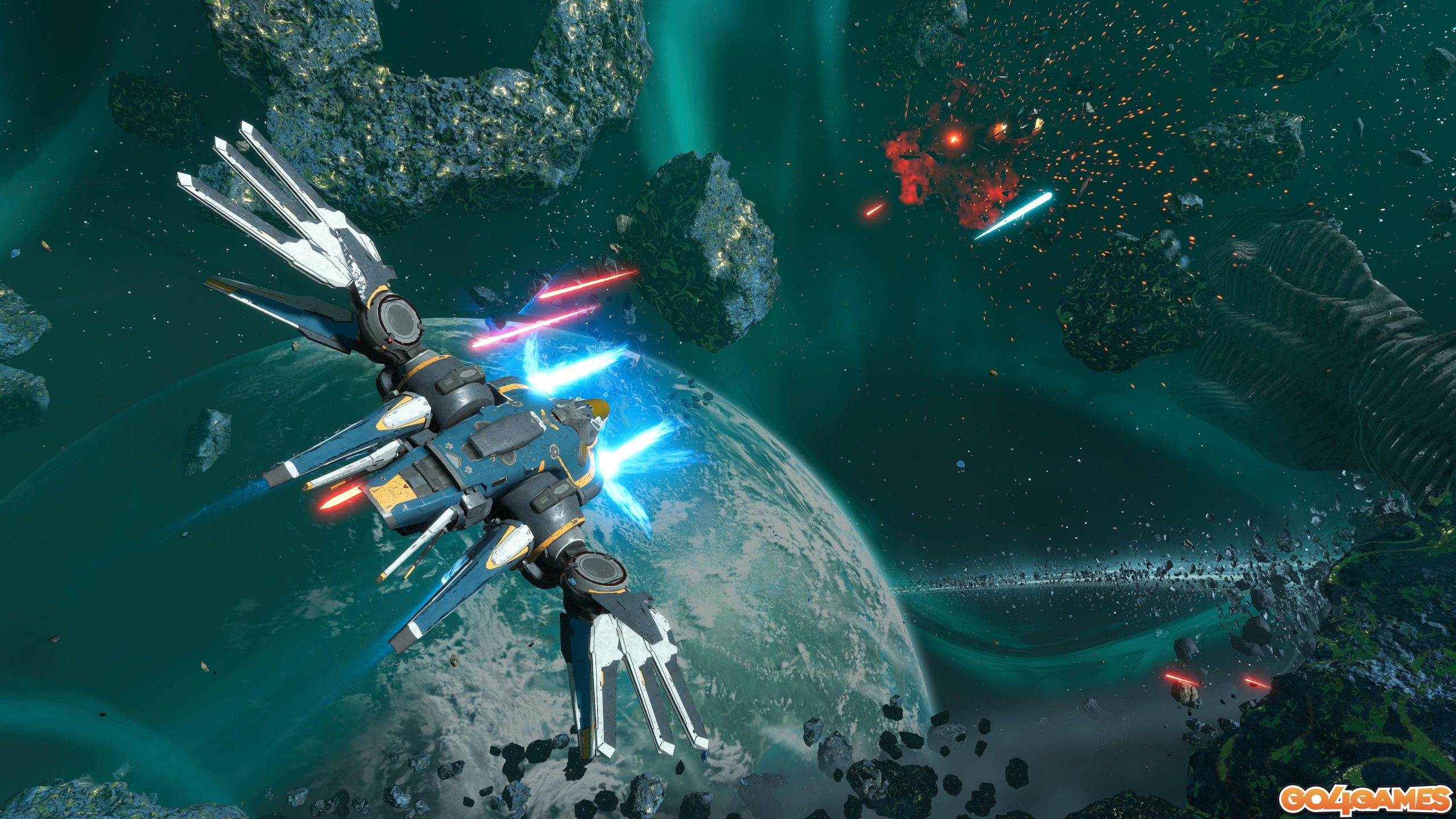 Graphically, Marvel’s Guardians of the Galaxy is one of the most enjoyable games released in 2022. Although different from the correspondents in the movies, the heroes have personality, and the artistic style used is the best choice for such a game. In addition to the care with which the characters are reproduced, but also their facial animations, Eidos Montreal has made a considerable effort in terms of building game environments, each chapter having its own visual identity.

And the icing on the cake is the implementation of reflections made using Ray Tracing techniques. Thus, metal surfaces, glass or ice realistically reflect the environment, light sources or characters, giving the game a special look. Moreover, this option, initially available only in the PC version of the game, was also implemented on the new PlayStation 5 and Xbox Series X consoles through an update. For example, on a PS5 console, using the Ray Tracing display mode, I ran the game without major problems, with a fairly constant framerate of 30 frames per second. Alternatively, you can opt for Quality (which prioritizes 4K resolution) and Performance (which targets a 60fps framerate). 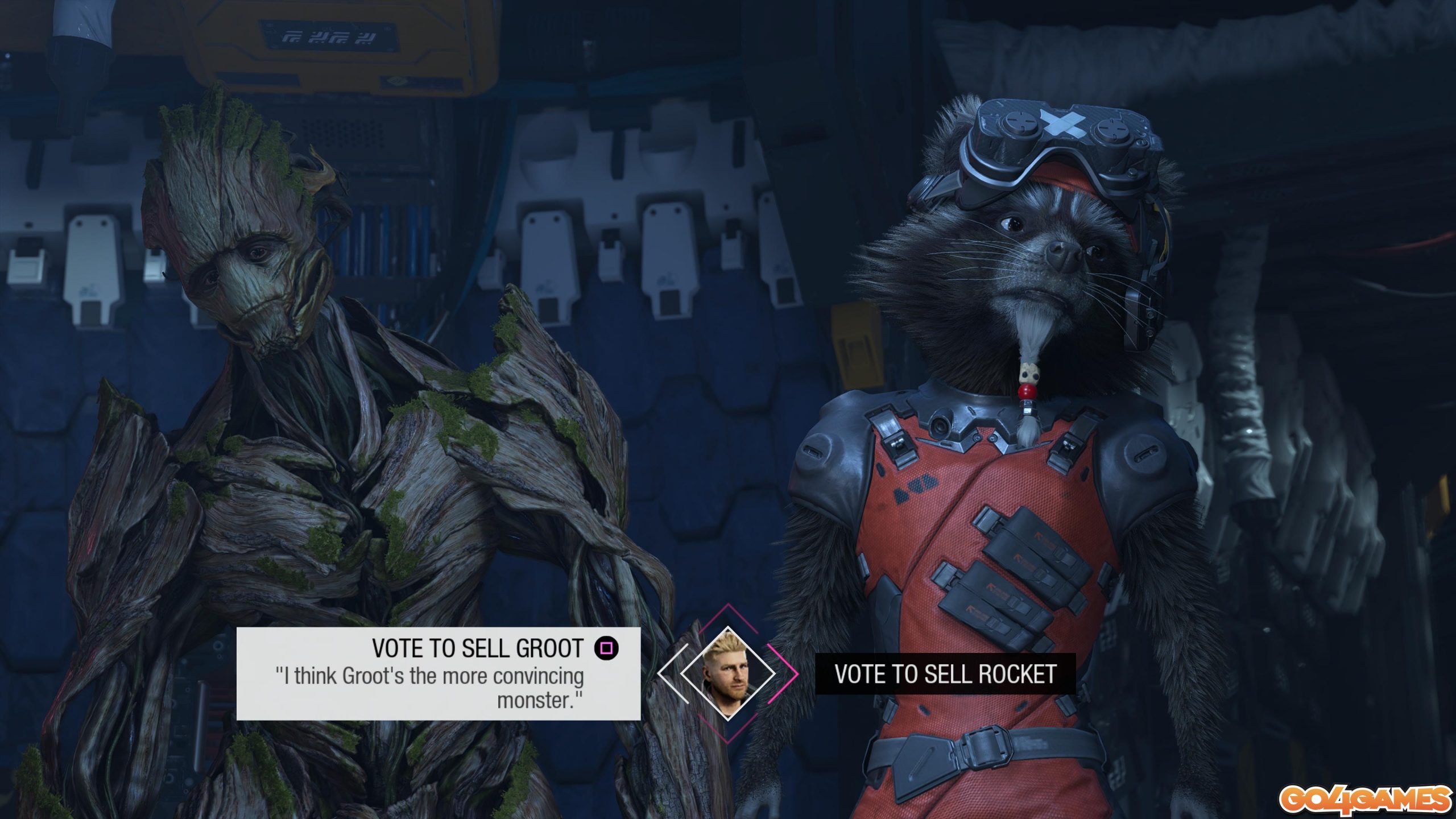 I mentioned earlier the excellent voices, which give personality to the heroes and charm to the whole story, but we can’t ignore the soundtrack from Marvel’s Guardians of the Galaxy. As expected, we have an excellent selection of popular songs from the ’80s, belonging to several musical genres. And the producers know exactly when to use them: few things compare to the assault on a space base, defended by hundreds of hostile shuttles, while in the boxes rumbles “Where Eagles Dare” from Iron Maiden, or the final battle, marked by the unmistakable “The Final Countdown” by Europe.

But the producers went even further: they recorded an entire album of original hard rock music, presented in the game right on the disc of the fictional band Star-lord, the band from which Peter Quill borrowed his nickname of superhero. In addition to the fact that these songs mark important moments of the story, the album is not bad at all and can be listened to outside the game, through music streaming services such as Spotify or Deezer. 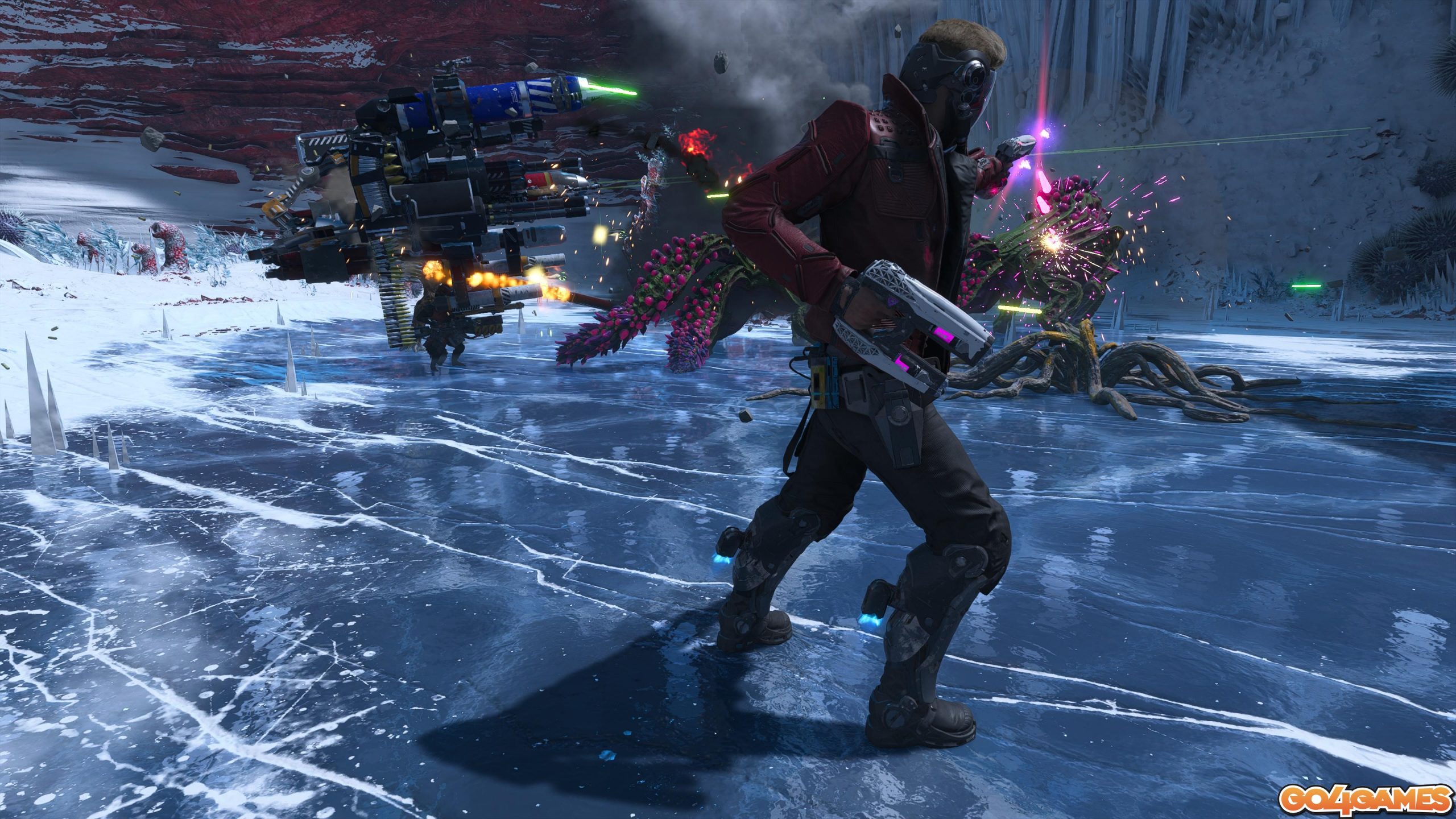 Compared to Marvel’s Avengers, the new Marvel’s Guardians of the Galaxy looks like a product from a different galaxy. A true AAA title, no forced multiplayer, no money upgrades, with a full story, nice characters, a flawless graphic presentation, with quite varied gameplay and a great soundtrack. And in the current landscape of video games, full of micro-transactions, the endless repetition of old patterns and the emphasis on quantity to the detriment of quality, we need such appearances, which have unfortunately become increasingly rare. .