The Chorus heroine is named Nara. She is a pupil of a self-proclaimed Prophet, who has chosen as his mission to bring the doctrine of Horus to humanity, which implied harmony and security for everyone. The Prophet taught the girl to connect to the ether and draw strength from the abyss, inaccessible to ordinary pilots, and in return, Nara became his main executioner.

Her fervent devotion to the doctrine collapsed overnight when a great healer and beacon for the lost ordered Nara to destroy an entire colony in Nimica Prime, which refused to accept Horus. The girl opened a rift that killed millions of innocent souls. And while in orbit there was a fierce battle between the “Circle” and the colonial security forces, Nara rushed away in horror at what she had done. 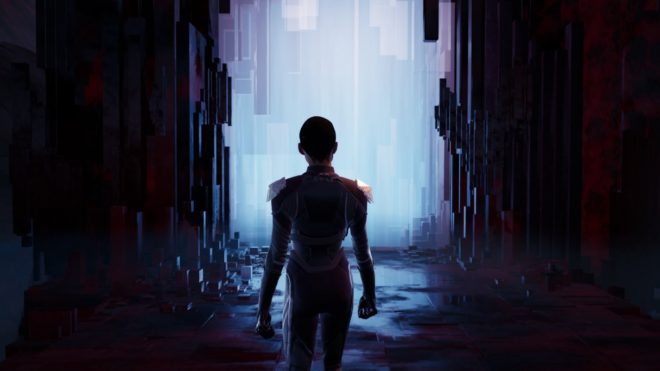 Seven years have passed since then. Nara burned out almost all the rituals (special gifts of the ether) from her memory and found a second home somewhere in the back of the galaxy, working as a scavenger in a small Enclave. Of course, she did not tell anyone about her inglorious past, and sealed the vessel of the Circle in the ruins of the “faceless”, having transferred to an old and maneuverable AR-1 fighter.

But the past catches up with the girl: the rulers of the Circle invade the system through the jump gates. Nara helps the locals repel the first attack, but realizes that now the fanatics will not stop until they enslave or destroy all the inhabitants of central Stega. Having gathered a small militia, Nara prepares to strike back at the very heart of the cult, but first she needs to re-go through the rituals and return an old friend – the sentient ship Forsaken. 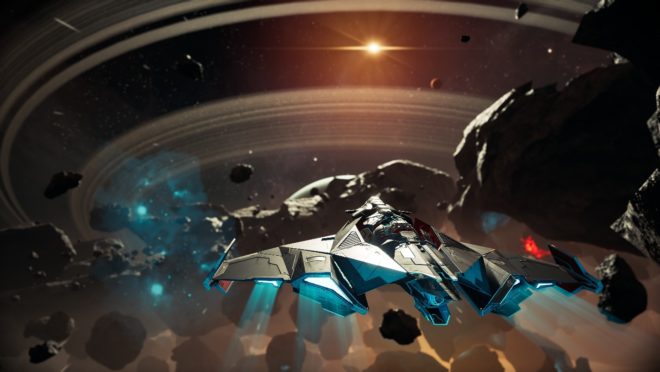 Chorus reveals to the players a family (if you count the “Void”) spacious areas, which have to be explored in turn, performing the main and secondary activities. The classic “flying-shooter” will not let the pilots go beyond the hangars of the stations, and even more so will not let them wander on foot – all game activities will be reduced to flights, dialogues, research and battles.

Chorus’s cut-scenes are quite budget-friendly, but space is filled with a variety of moving particles and attractive areas. With well-crafted light and reflections, the world looks picturesque and mysterious. Locations are animated by the movement of various ships, dynamic events and side tasks, and space highways are stretched between large stations. 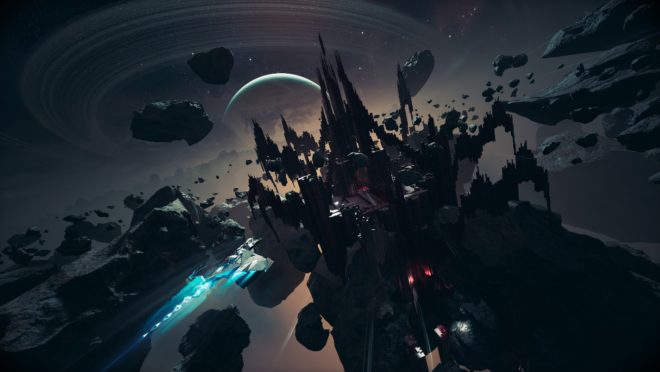 The ships in the game have a nice, but somewhat nondescript design. Most of them are well developed, their designs contain many moving elements (deflectable flaps, turbine elements, tools), but it is difficult to call them memorable. Even the ship of Nara will yield in sophistication to most of the vessels from the same Star Conflict.

But Deep Silver did not forget to make a photo mode. It does not have too many settings, but everything you need for beautiful space images is provided: background blur, the ability to turn off your ship, the simplest filters, vignetting. 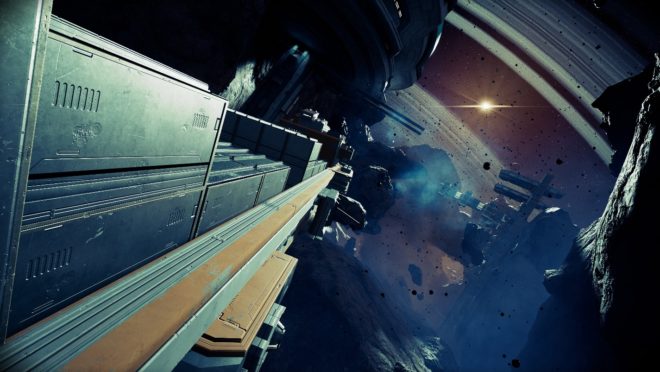 As you might have guessed, the controls in Chorus are as arcade as possible: pull, side dash and directional selection tied to a single sight for all weapons. Unfortunately, there are no strafe – the game allows you to “level” the ship by pressing the appropriate key, or does it on its own after some time.

The Nara battleship is equipped with a repair drone and three types of weapons standard for space shooters: a kinetic repeater for damage to structures, a laser against shields, and unguided rockets. In the docks of stations for credits, you can strengthen the shields and armor of the ship, as well as fill three Forsaken slots with mods with passive bonuses. 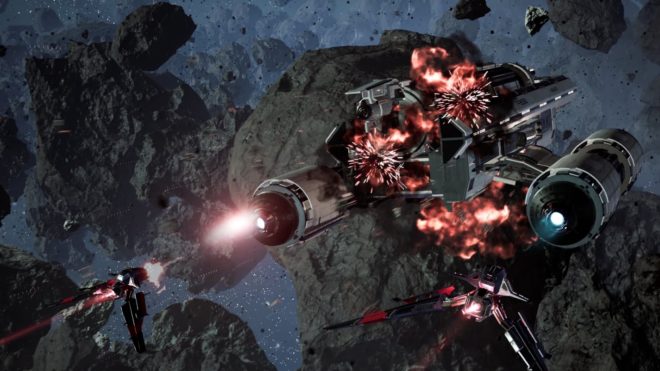 The development system of Nara is built on the principle: the more you use, the better it works. All the guns, some of the ship systems and rituals (unique abilities of the pilot girl), gain levels and become more effective. Even the very first “ritual of the senses”, which Nara uses to search for echoes of memories, objects hidden from radar and imprinted on the air of pilots’ tracks, begins to bring more profit, the more Nara finds values ​​with its help.

As you progress through the story, Nara will receive more and more powers. For example, he will learn the “hunting ritual”, which will allow you to sit on the enemy’s tail, and will master the “drift-trance” – something like Decouple-mod, which allows the ship to maintain a given pace and course while the pilot rotates the hull in any direction to hit the pursuer sharply or change course. 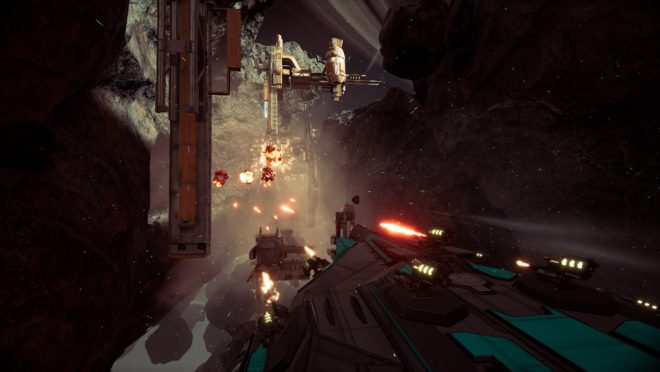 By combining Nara’s skills and three types of weapons, pilots can, if they wish, reject classic dogfights, teleporting to optimal attack positions, chopping off enemy ship systems or even ramming an enemy in the form of a light spear. The combat system in Chorus is easy to learn and quite effective, but fast and merciless – just one missed maneuver can cost the player most of the body armor. Especially at medium difficulty and above.

I did not see any significant, clearly defined shortcomings in Chorus. In a few hours, the quest marker broke only once, in one single place (on the Xbox Series X) the frame rate dropped a little, there are not enough distance indicators for the marks detected by the instinct – it is quite possible to coexist with all these little things. 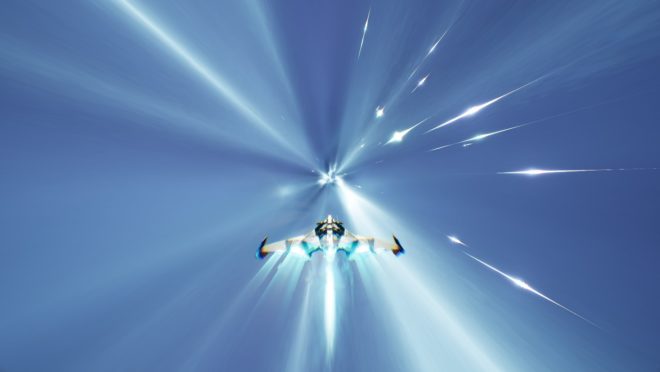 However, Chorus has one unpresentable feature that affects almost all aspects of the shooter – the game is too mediocre. There are no charismatic characters here, just as there are no memorable ships, and out of dozens of side missions there is not even one that you would like to tell your fellow pilots over a mug of “transgalactic ale”.

The heroine is haunted by gloomy thoughts, her stingy AI partner Forsaken is gloomy and also somehow depressed. Whatever they have a conversation about, it’s about an unsightly past. Around there is a mysterious and colorful space, and you are always on an oppressive wave. It’s like going on a long-awaited adventure with a depressed, indifferent friend – sooner or later his mood will be transmitted to the whole company. 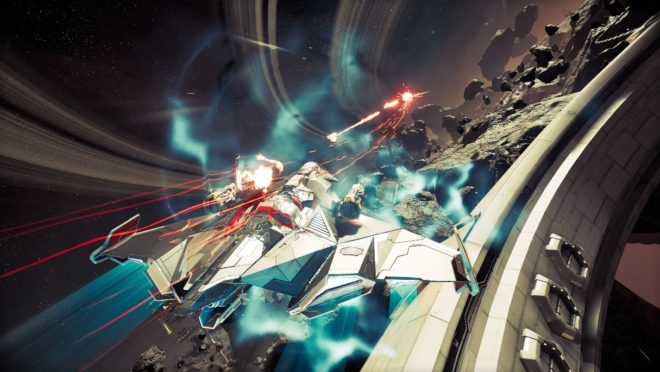 Chorus looks decent and has a good combat implementation. The design of the locations, the main plot and the musical background are also pretty good here, but you can’t call them impressive or, for example, fascinating. There is no resonance that usually prompts pilots like me to explore space, discover its secrets and learn about history.

A comparison comes to mind with some second-rate science fiction book. If you love and therefore read a lot of fiction about space, sooner or later you will come across works that you will read in full and put away to the rest on the shelf, and about a month later, when a friend, seeing a new spine in your collection, will ask: “And what is this book? Did you like it? Is it worth reading? ”, You will not immediately find what to answer.

Boring side quests and dynamic events

Coloring Kanta in the new guild hall from the third expansion of Guild Wars 2: End of Dragons, a video dedicated to the location
Hell Let Loose Coming To PS5 And Xbox Series In Early October

[TGA 2023] The Flash Hunt in the Gameplay Trailer for Suicide Squad: Kill the Justice League, Action-RPG Co-op DC Comics by Rocksteady
Recent Posts
You may also like