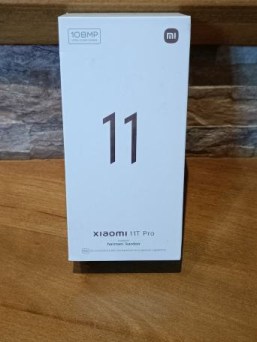 Why short? Because we have already presented the model behind it – Xiaomi 11T.

And the specifications are largely the same – the same size, almost the same weight (1 gram extra for PRO), the same display, the same operating system, the same cameras and the same battery capacity. Different processor (Snapdragon 888), GPU (Adreno 660), charging speed (120W) and we have shooting at 8K resolution.

Moreover, the design of the phones and the boxes they come in are identical:

The camera being the same, I can’t say much more than the previously tested model. I can only remark that the way the colors are rendered seems a bit deficient compared to 11T. I photographed my own car with both phones, and with PRO it seems much more open than in reality. Or than it appears in the pictures taken with 11T. Otherwise, nothing to comment on, the zoom works well here too.

If we were still talking about the camera, we also tested the 8K option, which is in addition:

OK, it’s something special, but it doesn’t bother me. Not for another, but you have nowhere to play such a video, and on a phone screen you can not see the difference between 4 and 8K.

At the software level, the state-of-the-art processor looks flawless. It’s just that, compared to MediaTek Dimensity 1200, we didn’t notice any noticeable improvement in performance. And MIUI is still MIUI to me, so I’m not going to get used to him too soon. A! Let’s not forget: I received a minor update, but I also discovered a bug! Specifically, Tasker requested a permission that the system “forgets” every time it is unlocked. The solution was to disable the application, although it is extremely useful to me.

If I have to point out one thing in particular, it is charging at twice the speed of 11T. Basically, in 15 minutes you charged it from 0 to 100%.